Join us at the Art Shed at 6.30PM to view a documentary on this amazing American artist. (More information on our Facebook page). Have an early dinner, bring a snack or eat later … 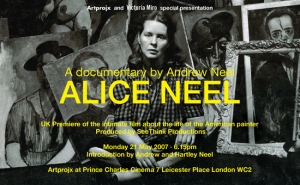 In 2007 Andrew Neel, Alice Neel’s grandson, directed a documentary about Alice Neel’s life. It explores her struggles as an artist and a single mother from the Depression era until her death in 1984.

The film includes interviews with her sons, Richard and Hartley Neel, the children of her deceased daughter, Isabetta, artists Marlene Dumas, Chuck Close and Alex Katz, art historians Rob Storr and Jeremy Lewison, and Neel’s surviving friends. It also includes footage from Michel Auder’s earlier film about Neel. The film, which was produced by SeeThink Productions, won the Audience Award at the Newport Beach Film Festival in 2007.

Link below to watch a trailer: http://www.aliceneelfilm.com/trailer.html